“How could this man I thought I knew
Turn out to be unjust so cruel
Could only see the good in you
Pretended not to know the truth
You tried to hide your lies, disguise yourself
Through living in denial
But in the end you’ll see
You won’t stop me
I am a fighter and I
I ain’t goin’ stop
There is no turning back
I’ve had enough
‘Cause it makes me that much stronger
Makes me work a little bit harder
It makes me that much wiser
So thanks for making me a fighter
Made me learn a little bit faster
Made my skin a little bit thicker
Makes me that much smarter
So thanks for making me a fighter”
~ Christina Aguilera – Fighter

This post is just a message to all those people out there making promises they can’t keep, promises they have no intentions of keeping, and those with the best of intentions, but have no clue how damaging broken promises can be to fragile souls. Mind your words carefully, for a broken promise makes you less trustworthy and it makes you a liar.

Once you replace negative thoughts with positive ones, you’ll start having positive results. ~Willie Nelson

I first became aware of the power of positive thinking in high school. I had changed schools mid year in the eleventh grade. It was the first time I had ever changed schools mid year. My parents had always been very careful about that and despite that high school being the eighth school for me, it was still a first. To be honest, it was something I had always wanted to do and finally my parents divorce was allowing me this privilege. A few months after that another girl was transferred to my final public school and we were instant friends. She called it PMA, Positive Mental Attitude. I had never heard of it and it began to change my life.
Like most teenagers, I was convinced that my life was the most tragic of them all. Little did I know how truly sheltered my life had been. The amount abuse inflicted upon me by my father was merely a foundation for the damage I would do to myself later in life. It was nothing compared to what others would do to me later. Yet, in moment of lucidity, I would draw upon that PMA that learned about in high school and it ALWAYS brought change…positive change.
It’s not always easy to maintain that positive mental attitude, but its a lot easier than allowing yourself to be sucked into an undertow of negativity and toxicity. I write a lot about walking away from toxic people and taking control of your life to keep those negative people out. However, I know that I am my own worst critic and I believe that most of us are like that. There are boundless articles online about maintaining a positive attitude and the power of positive thinking. I won’t bother writing all of that out. I merely encourage you all to seek out at least one article about it and try it for yourself.

Now about these photos! I saw this hair on Flickr and had to hunt it down. Its such a fun style and so versatile. I femmed it up a bit, but imagine all the ways you could enhance a role play outfit. Which is what I started off doing by pairing it with this Feral dress by Cellar Door, but then my own style kicked in and before you know it…tadaaa…I had paired it with these adorable stockings and retro heels and yeah…here I am!
If you’re like me, you love to explore the grid and part of exploring is finding great places to take pictures. My friends Kobie and Kess had told me about Whole Wheat a while back and I even managed to get over there to take a photo about a week or two ago. However, they just moved and they’re in the process of setting up new scenes. I found a few that were extremely tempting, but tis the season for all things pumpkin so I jumped right into this lovely little fall scene. There are already several amazing scenes, so when you’re done reading that article, cuz I know you’re gonna…go check it out for yourself! ♥ 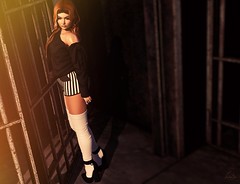