It’s all about Equal10!! Well, this post at least. I’ll readily admit that I am an event junkie! I love seeing designers from all over the grid all bringing out their latest and greatest in one place. Don’t get me wrong, I love some mainstore releases, too. Let’s face it, I love shopping! The thing about events, for me, is that each event usually delivers a certain flair. Equal10 has quickly become one of my favorites, because more often than not, I can count on at least three or four of my favorite stores to be presenting. This round is most definitely one of those. I did my best to squeeze in as many of my favorites as I could straight away. I mean, look at the list of credits! I love what I’m wearing. I love the pose. I love my surroundings.
I actually really love this photo and how it turned out. *winks at her haters* Yes, I used bokeh and an overlay. I know its not perfect and I’m by far no expert photographer or editor, but if you can’t love your own work….how can you expect others to like it? Naturally, with me loving the photo so much, it will probably do poorly on Flickr as that seems to be the trend when I really like a photo. *laughs* That’s just the way the Flickr cookie seems to crumble. The real point of this photo is to show off all the insanely good creations that the designers have shared with us at reasonable prices. 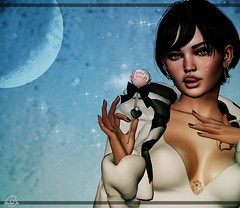