Somethings never change. *laughs* So, I have boxes of notebooks and loose papers filled with words I’ve written, notes I’ve taken, letters, poems, short stories, essays…just anything and everything. So, I’ve been going through a lot of this stuff, realizing that I don’t need a lot of this crap and since I’m sort of starting over, why not declutter my life before I turn into a hoarder, right? I got really tickled as I was going through this one notebook. I remember I had sat down with my friends and stacks of note paper. We sat around drinking coffee, laughing, talking, and whenever one of us thought of a good topic for me to write about or a question for me to answer, we wrote it down, folded up the paper and dropped it in this shoebox. The goal was to take out a piece of paper at least once or twice a week, and respond to the topic, date it, and maybe, if I felt like it, I would share with them later on. I didn’t.

However, I came upon that notebook and found an entry dated the 2nd of February, 1999. So, twenty years ago, here’s what I wrote in response to a topic that said: My Worst Habits

I’d have to say that my worst habit would be smoking cigarettes. I’ve tried to quit several times. Apparently, I have not tired hard enough. I also cuss way too much. It’s not attractive, ladylike, or professional Its unnecessary and I need to quit that, too. I procrastinate too much. I smoke too much weed. It has affected my memory and it makes me lazy. I don’t think I’ll ever quit all together, but I surely need to ease up. I have a lot of bad habits and I need to make a list of the ones I want to change, and if need be, replace them with more positive ones.

Just to drive home the point of me sharing this…I still smoke, I still cuss too much, procrastination has become an art form, and I still smoke weed. Though not nearly as much as I did back then. I think back then, I smoked no less than a couple ounces a week. *shrugs* I had a good deal in place and that was my life. Those were some good times, but the real point is a line from one of my favorite songs ever, “What I am is what I am…”
If you don’t know Edie Brickell & New Bohemians….check it out. Yes, its older than most of my readers, but like all the best music…it is timeless.♥ 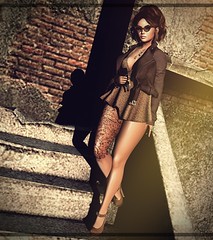