“It checks you in and kicks you down,
And chews you up and spits you out.
It messes with your sanity by twisting all your thoughts around.
They say it’s blind they say it waits but every time it seals your fate.
And now it’s got you by the balls it won’t let go until you fall.
I was down and out, got up I said “Hey love I’ve had enough!”
I’ve felt pleasure without pain.
My soul you’ll never tame!
Love bites, but so do I.”
~ Halestorm – Love Bites (So Do I)
I think this is the longest I’ve ever been single in Second Life, aside from when I was married in RL. I’ve dated a bit here and there, but nothing has stuck for more than a week. God forbid I have a life aside from sitting around waiting for someone to complete me. The last two men I’ve dated felt that me not answering within a 30-120 second window was disrespectful. Well, I got news for ya, fellas. I have a life. I’m complete all by myself and while I am naturally submissive, I will NOT roll over and play dead just because you’re online. I’ve been in Second Life for 12 years. I’ve made a few friends. I’ve got a few jobs. I have a lot of interests AND I chase squirrels/shinies. Apparently, that’s too much for some people.
I do know that it can be annoying, but most people either get it and embrace it or they move on. I play Guild Wars 2 with one of my best friends and he has told me that he feels like he’s herding cats when he plays with me. *laughs* I’m always running off in the wrong direction to look at something new or chasing materials for crafting. See? He embraces my inner cat and so do my other close friends. I do know it can be aggravating, because believe it or not, one of my friends is worse than me. I won’t call any names today, but if she’s not paying attention I know she’s been captured Facebook.
So, despite being very lonely at times, especially with the holiday season quickly approaching…I’m just going to enjoy myself with whoever I want, whenever I want. Anyone that has an issue with that can file a report with my keeper. Oh, wait, that’s right, I don’t have one. *giggles* That’s right, I do what I want! Remember that.
I wish you a day filled with love & laughter. ♥ 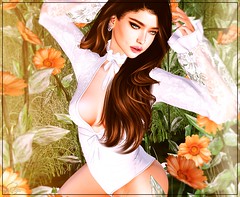