Why is everyone in such a hurry these days? I’m referring to SL relationships. We’ve all seen the people that jump in and out of relationships. Partnered to someone new every other week or month, then complain about why their relationships didn’t work. Seems like an awful lot of unnecessary drama and hurt feelings to me. I used to think I had a four month expiration date, because my average SL relationship was only lasting four months, but I didn’t rush into any of them. The last one I had, we dated quietly for months before telling anyone, much less becoming official. Now, I’ve been single for over 3 months and I simply can’t imagine rushing into anything with any of the men I’ve met. It can take weeks for me to even figure out whether or not I want to have sex with someone. Granted there are those that you know immediately that sex is definitely on the table, but in those instances I’m not expecting it to be anything but casual. I’m not an idiot. Sex does not equal love or even slove as my friend, Poppy, puts it. (I tend to agree with her on that.) I dunno, I guess we all have our pace. It just seems to me if you take your time and really get to know someone first, you might save yourself some heartache. Then again, what do I know….368 day of what I thought was magic turned out to be really disposable and I was easily replaced in no time at all. *shrugs* So, I have no idea who the hell I think I am giving relationship advice, but that’s what’s on my mind today. So, that’s what you get. 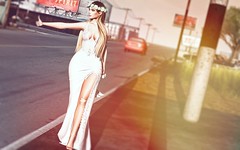