Posted on November 8, 2016 by Sadystika Sabretooth

If you’ve never smoked weed, you don’t know the amazing Wake & Bake. Let me just tell you, there is no better way to start your day. Mind you, its probably not going to be an especially productive day unless you’re the creative type. In which case, its best to have pen and paper on hand, because its not likely you’ll actually create something amazing so much as have the most incredible ideas EVER! That is until you’ve come down and looked at your chicken scratch with a sober mind…then you might just be wondering exactly how high were you when you thought that writing a short story about a chicken literally being crucified. Then again, you might just surprise yourself, because I have had some of my absolute best ideas on such a day.

If you’re lucky enough to get up before the sun, then wake & bake? You’ll see God! Ok, its really just the sunset, but it’ll make a believer out of an Athiest for a minute at least. Now, I’m not suggesting everyone run out and get high, especially those that have never tried it, but….yeah, who am I kidding…I do think everyone should try it…at least once. Reason 679,402 as to why I’m not a parent. HA!

I don’t smoke it nearly as often as I’d like to, partly because where I live will be the last state in the union to ever legalize it and partly because I’m currently job hunting and those pesky drug tests won’t pass themselves. So, its pretty clear that I’m an advocate for the legalization of marijuana. I know you must be shocked. I don’t need to advertise weed, because those that smoke it know all too well how great it can be. Those that don’t? Well, that’s ok, too.

More importantly, you should go shopping in Second Life, because there are some amazing creators out there doing equally amazing things. So, check out the details below for all the important info on the stuff you see in the pics and hit those events, cuz I promise there’s something for everyone somewhere. Do I sound high? I can’t even imagine why..*offers a blunt to the readers*

“When you smoke the herb, it reveals you to yourself.” —Bob Marley 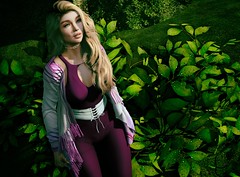 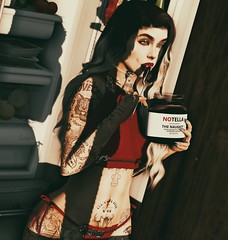 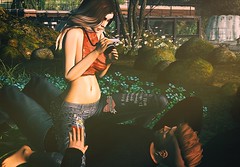 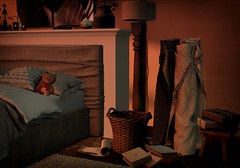 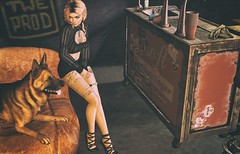